Faced with a rise in shipwrecks in the 19th century, public demand grew for a harbour of refuge to be sited on the north coast of Scotland. Due to its strategic location, Peterhead was chosen as the port for this huge engineering project. Granite from the nearby Stirling Hill quarry was chosen for the construction of the breakwater and it was decided the labour should be undertaken by convicts. Initial estimates were that the project would take 25 years to complete and that its legacy would be the establishment of a prison outside the town.

The prison officially opened in 1888. Convicts were transported every day on a purpose-built railway line to Stirling Hill quarry where they were set to work. At their destination, they were given sledgehammers to quarry the granite while guards armed with rifles, bayonets, and cutlasses watched over them. The potential for violence was ever-present. In all its years of operation only one prisoner was shot and killed at the quarry, in the 1930s, for trying to escape.

Some of the notable occupants at the prison were not even criminals. The Scottish socialist John MacLean was sentenced to hard labour at Peterhead for his vocal opposition to the First World War. Oscar Slater, a German Jewish immigrant, was wrongfully convicted of murder in 1909 and spent 20 years at Peterhead before being released and exonerated.

Imprisonment with hard labour was abolished in the Criminal Justice Act of 1949, with the harbour still unfinished, and prisoners were subsequently employed in industrial work sheds within the prison grounds. 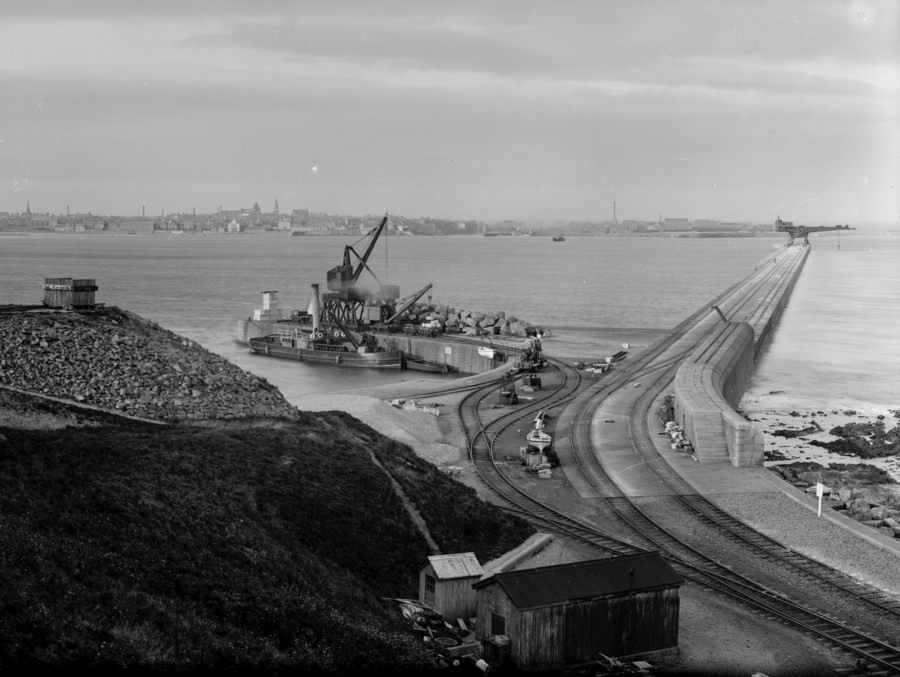 In September 1956, after 70 years of construction work, the breakwater project was finally completed.

Peterhead Prison itself was built between 1886 – 1888. The core of the prison was on the north of the site, comprising an area of circa 6 acres on which there were at least 14 buildings. Initially, the prison at the north end of the site comprised a perimeter wall, three halls (A, D, B), infirmary, reception, bathhouse, kitchen, laundry, barracks, recreational hall and chapel.

By 1910, in response to higher prisoner numbers, an additional hall (C) had been built and the infirmary extended. Halls A and D formed a single long structure and was originally designed as a single hall; it is four storeys with a basement and attic area. Drawings of 1897 show a pitched roof with crown mouldings and 10 rectangular ventilation stacks, and the west elevation with 160 cell windows. Internally, Hall A was organised around a central hall flanked by galleries.

Hall B and its annexe was three-storey with attic building, with projecting horizontal coursings at floor levels in the same style as Hall A.

Hall C was designed in 1911 and was a three storey building 33.6 m long. The northern gable had a large semi-circular arched window. Internally the design was similar to the other halls, with 29 cells per floor. A further block, E, appears to have been built sometime between 1886 and 1914. The kitchen block formed part of the original design. The hospital building was also an original feature of the prison: two extensions (including a plant room) were added in 1910, with further later additions. In the southern part of the site were railway sidings and long workshops.

Over the decades the prison would continue to enjoy a fearsome reputation, notorious for hunger strikes, rooftop protests and even hostage-taking during the 1980s. By the 1990s the first female prison wardens were appointed and in 2006 the first female governor took charge. The prison finally closed its doors in 2013, after 125 years of existence being replaced by a new prison, HMP and YOI Grampian which opened in 2014.